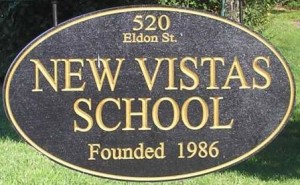 In 1986, New Vistas School was founded by five Lynchburg-area women as a private, non-profit day school dedicated to serving the needs of children and adolescents experiencing learning and attention difficulties.  “Founding Mothers” Dell Hancock, Patricia Kirtley, Libby Jarrett, Dorsey Mayo, and Lucy Guggenheimer Ross were honored for their vision and fortitude at the 2007 Commencement & Graduation.  This year, 2021-2022, marks the thirty-fifth anniversary of the school’s continuous service.

A community-wide tutoring component for young people and adults was added in 1987.  In 1990 the school moved to its present location, 520 Eldon Street, which it owns.

This facility is sound and well-maintained.  It consists of an older two-story building of fourteen rooms, with a newer two-story wing of eleven rooms, plus six bathrooms, all recently remodeled and refurbished to optimize the space educationally.  A two-room Science Lab (or SLAB) is also located on the campus grounds.  By 2010, NVS, through generous gifts and grants, had provided two fully equipped Media Labs as well as computers in every classroom.

In 2001, The Lucy Guggenheimer-Ross Endowment was established by Rosel and Elliot Schewel.

New Vistas School was accredited by the Virginia Association of Independent Schools in 2005; on the 2015 Ten-Year Visit the accreditation was renewed for another five years. In 2021 the school went through a five year interim visit from the Virginia Association of Independent Schools, granting us renewal until 2026.  The Virginia Department of Education renewed the NVS’ license to operate until 2024.

At the end of the 2006 school year, after the school experienced twenty years of success and growth under her leadership, co-founder and Head of School Lucy Guggenheimer Ross retired.  In July of 2016, Charlotte G. Morgan, retired as NVS Head of School after ten years of outstanding service to the school.

In 2007, NVS expanded its offerings to students with special needs by collaborating with Presbyterian Homes and Family Services in the management of their Webster School.  At the conclusion of the 2009 spring semester Webster School was closed.

In July 2016, Dr. Lisa J. DeJarnette, former NVS Assistant Head of School and faculty member, was appointed as Head of School.  Her professional career working with students with specific learning needs, as well as her previous tenure with the school, provide consistency and stability to the school as it continues to serve the unique educational needs of the school’s students and their families and the community at large. Dr. DeJarnette completed her tenure as Head of School in June 2019.

In July of 2019, Lori Eaglin was appointed the Interim Head of School for the 2020-2021 School Year. Ms. Eaglin first came to New Vistas School in July of 2006 where she has been serving as the Guidance Counselor, Student Service Coordinator, and Admissions Chair. Ms. Eaglin has over 30 years’ experience working with students with learning differences in a variety of settings. Her expertise provides the same consistency and stability provided by her predecessor. In March of 2020, Ms. Eaglin was named Head of School by the Board of Directors.

NVS continues to increase enrollment and expand the facilities for even more students who need these specialized services in the Central Virginia region. Today, NVS remains committed to its mission and core principles of offering an individualized instructional program in a safe, nurturing environment, “educating one child at a time.” As we know so well, “Some children learn differently.  We teach differently.”